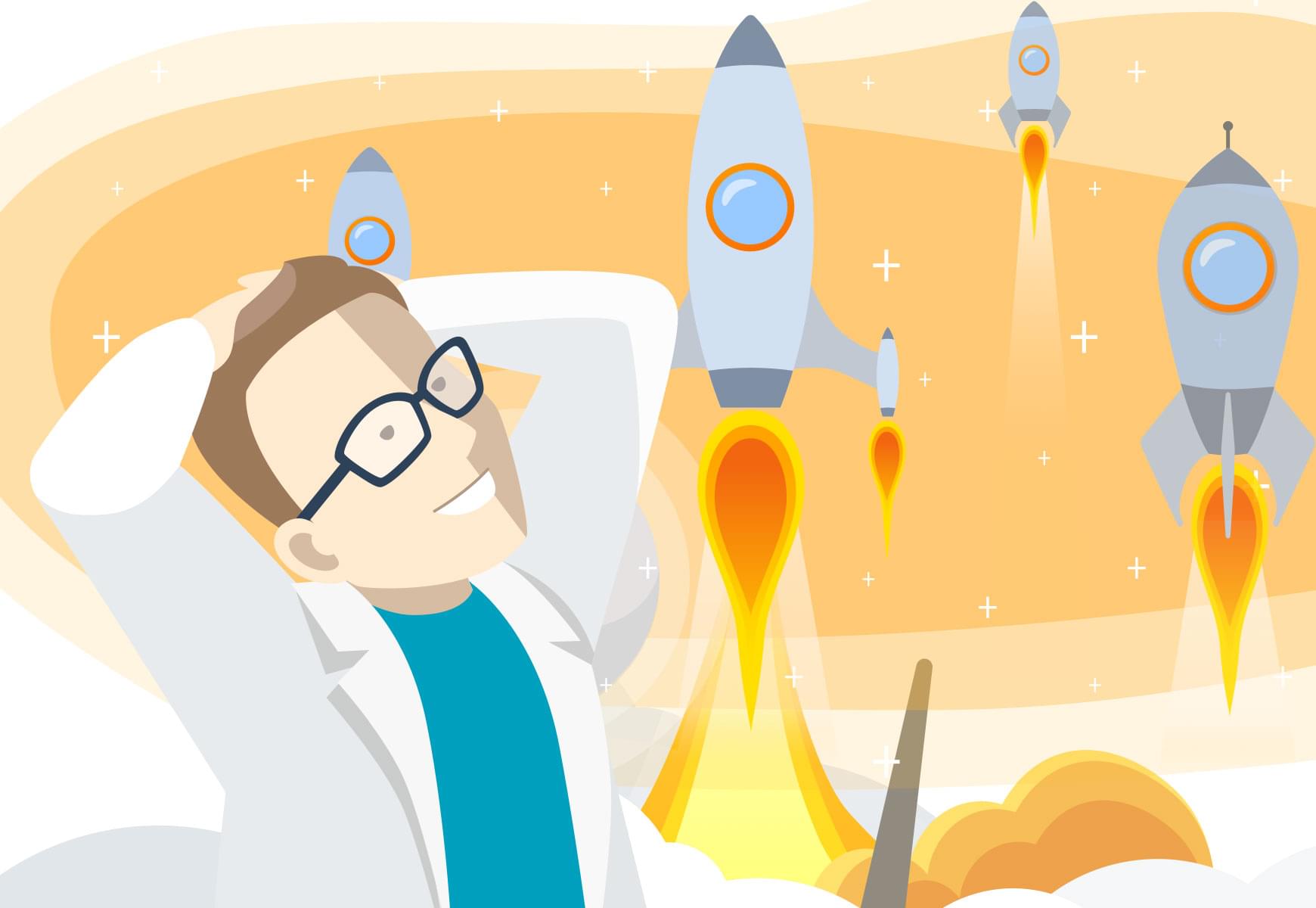 An organisation is only as good as the people who run it. The larger an organisation, the harder it is for the various employees to work as a team. It’s also hard for the management to see which individuals and groups are working well, and which can do better.

Here’s the good news: many of these goals can be achieved simply by using a small but smart piece of software: Karma bot.

How does Karma bot do it? By taking a good idea and making it better.

Thousands of business teams have ditched emails for Slack, probably the most famous chat-based platform for team collaboration. Using Slack, various bots, automated scripts and apps can be added to enrich the experience. Karma bot is one of such solutions; a secret ingredient to a happy team recipe.

Stas Kulesh and I are the founders of Sliday, an Auckland-based software development company, managing a remote team of 30 software developers. We quickly realised that the group was poorly motivated and often lacking direction. After some thought, we came up with the idea of a chatbot that would handle Reddit-like karma points.

We had great staff, but they were often not working as a group and were sometimes heading in opposite directions. This meant that projects took longer and cost more. So we wrote Karma bot to get around these issues. That’s why it works. Karma bot is a solution born out of necessity. It was originally a chatbot made to manage our own in-house team. We also realised that our business was having the same problems as many larger organisations. So we took Karma bot to the world.

Karma bot is a feedback system; it allows individuals and groups to rate each others’ contributions. Karma bot follows the basic feedback strategy, giving the same positive and negative feedback within an organisation, but the big emphasis is on positive reinforcement rather than negativity.

Thanks to Karma bot, teammates can reward each other by karma points 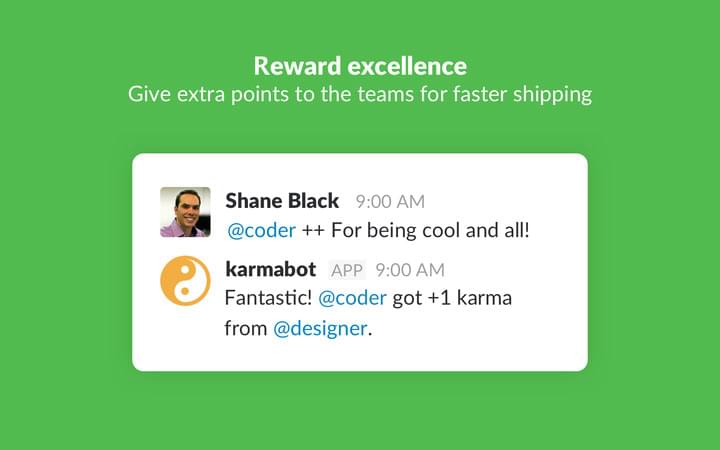 Karma, in this context, means tasks being accomplished, or targets achieved for the organisation.

Using Karma bot one can request karma for any other member of the team. Karma points could be given for something important such as reaching a milestone early, or just a nicety, such as ‘being awesome’.

The karma points of each member of the Slack’s channel are counted. The moderators have the discretion to approve or decline karma to any team member. If the company’s management choose, accumulated karma can be converted into a monetary bonus at the end of the month or quarter. 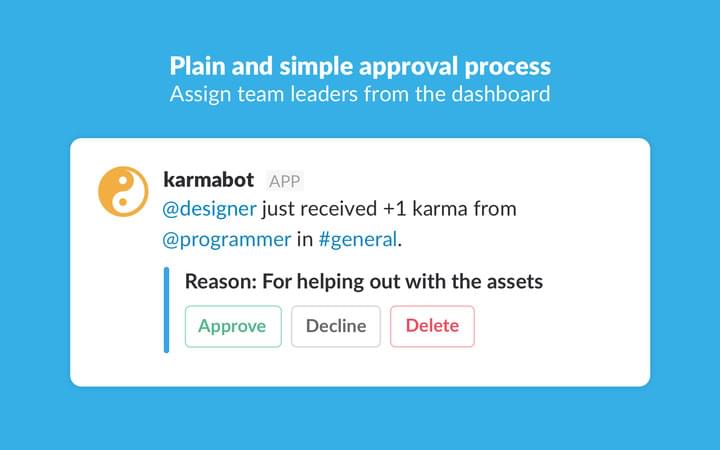 Employees who perform badly face bad karma. Karma bot offers a system of penalties — for example, if someone ignores a request or lets the team down, they may receive negative feedback 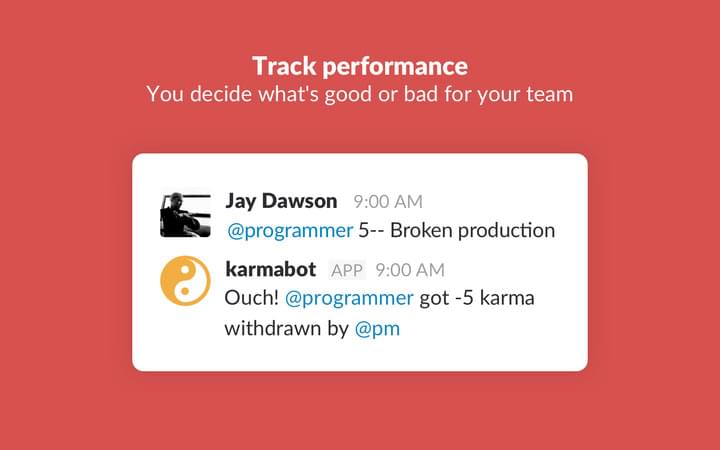 As with positive karma, team leaders can choose to approve or decline negative karma requests.

Team leaders can also encourage or punish not only individual users, but the entire team.

Karma mantra gives structure to the karma points. For instance, at Sliday, each team member gets +30 karma points for early delivery. On the negative side, if something goes wrong (for example during a client presentation), the employee responsible for the presentation loses 10 karma points.

Within each organisation, the team leader structures the Karma bot account, setting the number of projects that should be completed during the month or quarter. The team leader also assigns karma points to the individual elements of the project and the project as a whole.

The more projects a team delivers, the bigger bonus it gets. At the end of the month or quarter, each member’s individual karma is rewarded. In addition each member is rewarded with a percentage of the group total.

For example, imagine there is a team of four. During the quarter, this team collectively earned 300 personal karma points:

At the end of the quarter, the team also got 3000 points for the delivery of the projects. The quarterly bonus would be divided according to their shares: 1050, 1500 and 450 of karma points. 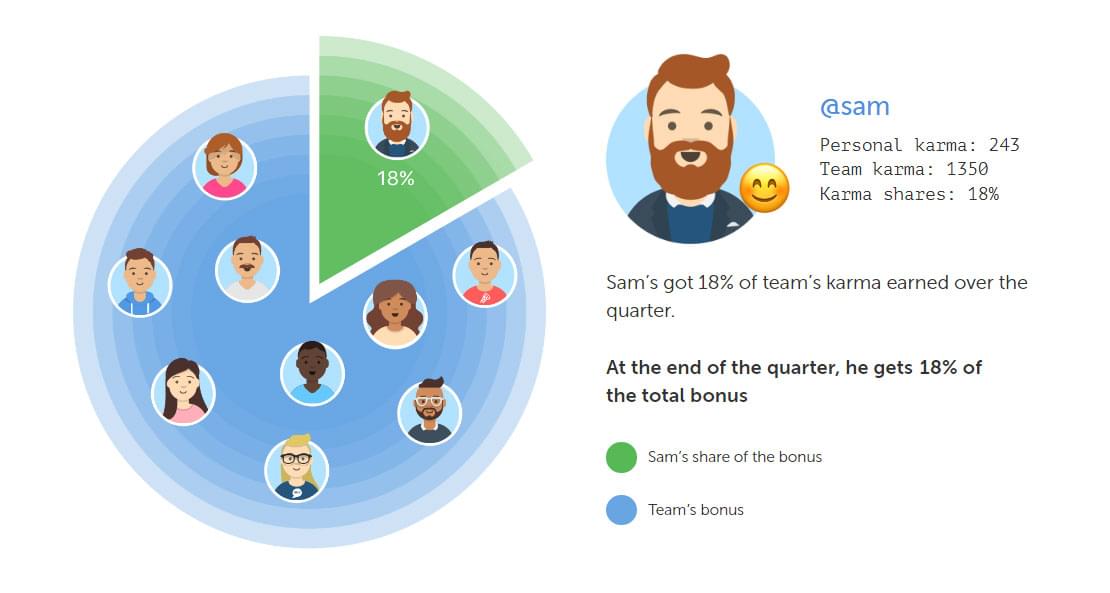 Transparency is a critical part of the Karma bot system. Since the process of distributing positive karma is public, no one asks why one team member gets 35% of the bonus, while another gets 15%.

This success motivated us to publish Karma bot in Slack’s App Store and on the ProductHunt platform.

Giants like Twitter, VMware, Expedia, Microsoft, Walmart and others quickly adopted Karma bot. We started to collect and analyse feedback for further development and improvement. For example, customers asked us to add performance and time tracking features. So we quickly incorporated these features. In a way, our users helped create Karma bot.

Karma bot now utilises Google Cloud Machine Learning Engine to track performance. Along with karma points, users are encouraged to explain what the points were for. For example:

@name ++ for completing the task on time 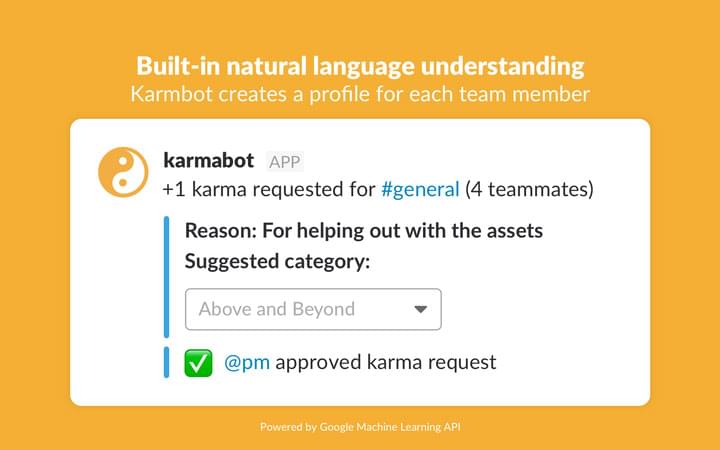 For example, imagine an employee asks a manager for a salary increase. The manager views the employee’s karma records. If the employee has good karma, the manager might say:

Yes, of course you can have a salary increase. Your performance has been excellent.

Let’s first try to improve communication with your teammates.

Since the team karma depends on the performance of the whole team, profiles contribute to the development of team cohesion. Profiles help employees to address their weak spots. Karma also leads to a healthy competition that fosters effectiveness.

The Status feature allows managers to monitor team members to ensure they stay focussed on their tasks and projects.

When a team member embarks on a new task, she or he must send his status to the bot. For example:

I am writing code

Because the manager is getting ongoing summaries of each team member’s progress, it’s possible to spot both productive and unproductive employees.

For example, an employee may be consistently writing quality code at a rate that’s faster than average. This can be noted and karma points allocated to this employee.

On the other hand, the manager may note that a particular developer has dealing with bugs for quite a while and may therefore ask if that employee needs help.

At the end of the day, when all employees finish their sessions, Karma bot compiles a detailed report and emails it to the team leader. The report provides comprehensive summaries of work in progress, lists team members according to each project, shows what was achieved and wasn’t achieved, by whom, and how much time it took. 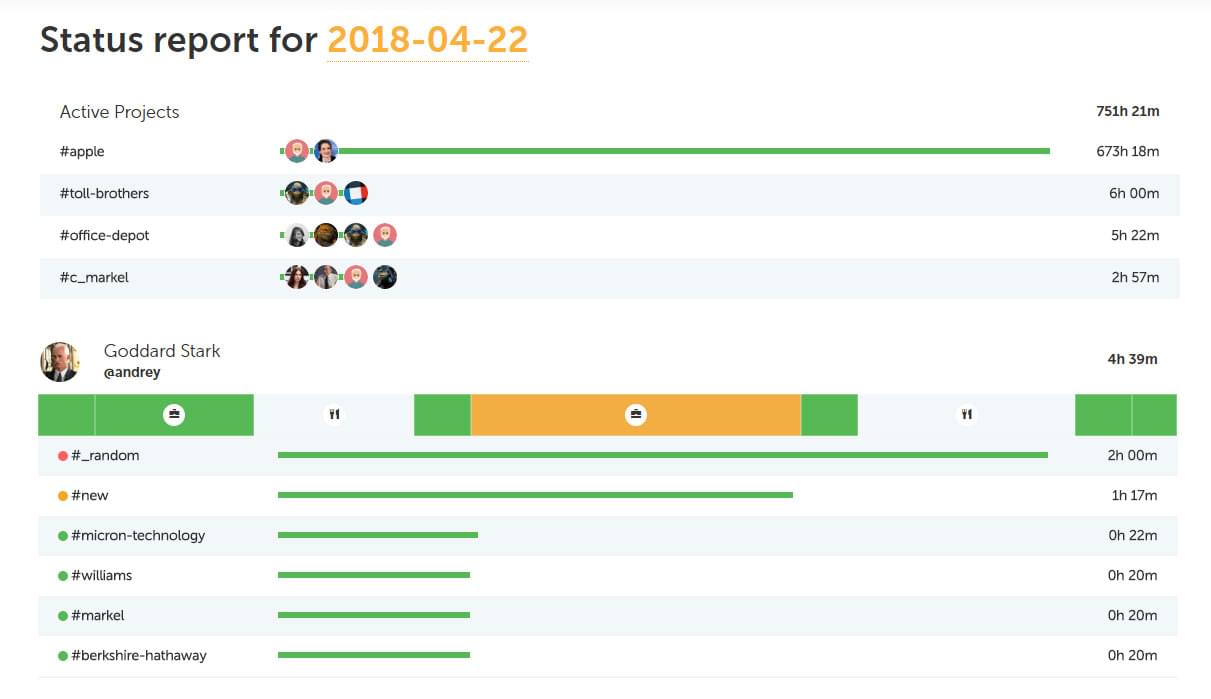 Thanks to these reports, the manager can calculate the cost of their work, as well as the final cost of services for the client. For those who wish to streamline and automate their business processes and fully utilise the Slack environment, Karma bot offers an easy way to set goals, track performance and reward excellence.

This success has also been recognised globally: in early 2018, Microsoft announced a significant investment (under one million $) in Karma bot.

These funds have been allocated to adapting Karma bot for MS Teams, part of the Office 365 package.

The presentation of the product will take place in May 2018 at the MS Teams conference.

Thanks to this partnership, Karma bot plans to attract a million users worldwide. Microsoft has therefore opened a significant global market opportunity for Karma bot, especially for corporate customers.

Karma bot is a wonderfully useful tool for tracking performance, handling promotions, assigning actual monetary rewards and bonuses, together with deciding on salary appraisals. The Karma bot system is both transparent and fair.

Karma bot 30-day free trial available and don’t miss our limited 40% OFF offer. Hurry up, the introductory pricing ends on the 31st of May.